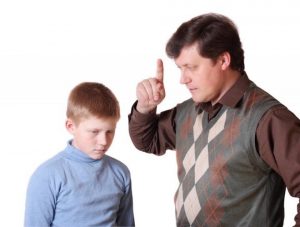 The Power-Fear Color of Worldview is widely discoverable—from the villages of rural Ethiopia to simple southern American towns, to the houses behind the dikes in the Netherlands and back around the world again. There are cultures and communities and individual homes where power and fear are wielded, either for good or for ill.

In those homes, parents are to be respected and obeyed; children are taught to know their proper place. Some households inherit a Power-Fear –tinted paradigm from previous generations, or they adopt it from more immediate external influences. And different households apply this cultural element with varying levels of intensity and different purposes in mind. Some use power and fear to manipulate, but some apply it differently, in an understood milieu of reciprocal love, value, and respect.

Depending upon your cultural upbringing and cross-cultural experience, you may have a more negative or more positive impression about each of the Three Colors of Worldview. Perhaps you grew up in a predominately Honor-Shame or Guilt-Innocence cultural environment. If your cultural background reflects one or another worldview strongly, the others may strike you as lacking worth, efficacy, relevance, or even moral virtue.

To those for whom a Power-Fear cultural worldview seems foreign and baffling, it is important to recognize how your own background truly filters your presuppositions about Power-Fear. Be willing to admit that your ideas about Power-Fear’s usefulness or legitimacy may be influenced, even skewed, by your native cultural context. Perhaps you have ever had exposure to only a caricatured, twisted rendition of Power-Fear. Before you can rightly comprehend and utilize Power-Fear appropriately and beneficially, you may first need to set aside your personal presuppositions and strive to accept Power-Fear as both valid and neutral. Over time, the inherent worth and positive aspects of the Power-Fear approach will become increasingly evident and absolutely relevant as you interact in intercultural situations.

Growing up in the Netherlands, I was the eldest of four sons. In our family, it was very clear that, without question, my father was to be respected and obeyed—but, for the most part, the concepts of power and fear were applied in a loving fashion and utilized, ultimately, to protect and equip us. In many instances, the overarching aim was to see us actually survive childhood and be prepared optimally for life “in the real world” one day. My parents wanted us to follow “the straight and narrow,” to make good decisions in life, to avoid choices that would eventually bring us harm. So by and large, there was an application of power, and a use of fear, that was intentionally constructive. It was even, in a way, empowering—although, especially as a teen-aged boy trying to wriggle out from under strict limitations, I felt often that my dad was intentionally disempowering me, deliberately trying to take my life away from me. Doubtless, I harbored a melodramatic opinion of his methods and motives.

While I was familiar with Power-Fear to a degree in my own home, the use of it as a pervasive idea, as a way of life, as a way that governs society—that was nearly a foreign concept for me. Our home was a bit of an anomaly in our broader culture. But outside that bubble, I did see Power-Fear manifested occasionally in small ways: It surfaced sometimes in sports. Sometimes, it showed up in the Church and at school.

But in our country’s culture as a whole, that double-sided coin of Power vs Fear just did not have an overt influence. It was not present in politics. It was not present in civil society. So for me, having grown up with these compartmentalized glimpses of Power-Fear, I had accrued a very negative opinion of Power-Fear and was quick to dismiss its usefulness, perhaps even its morality.

A high hurdle that kept me from understanding, appreciating, and embracing the mechanisms of Power-Fear was that whenever power and hierarchy were strongly manifested, quite often they were being exerted by unwise or egotistical leaders. The outcome was neither empowering nor life-giving. Typically, the contrary was true: Someone would strike out on a “power trip” and wield inappropriate amounts of fear in order to assume the utmost control. Rather than enabling and enriching people’s lives, the mechanisms of Power-Fear were usurped and used to suck life out of people, to drain them, and to dominate. The egotistical power-trippers seek to weaken their subjects to the point that, in comparison, the power-hungry would feel even stronger and more superior.

I would like to think I am quick to claim the importance of employing all three of the Three Colors of Worldview as you engage other people, as you build teams, as you lead, as you build corporate culture. But as a result of those negative perceptions in my own life, I have been taking a longer journey, to be honest. I took longer to embrace Power-Fear as a neutral in and of itself. Slowly, I have begun to see the beauty of it; I have begun to distinguish that there is finesse in applying it.