Part of a series about the Innocence-Guilt Cultural Paradigm 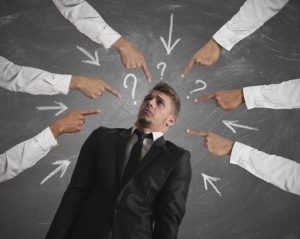 At least in the mind of someone accustomed to the Innocence-Guilt way of thinking, it boils down to “who dun it”: you either did it (and you’re guilty), or you didn’t (and you’re innocent). Did you trespass a law? Did you undermine an absolute? Did you deviate from the straight-and-narrow? Or not?

A sense of innocence seems admirable, but it is also possible to overuse innocence There is such a thing as an UNhealthy preoccupation with being or looking “right.” For international corporations and non-profits, it is becoming increasingly important to self-examine and to guard against an excessive focus on innocence.

In the first part of “Applying the Innocence-Guilt Cultural Paradigm” (Part A), guilt was described as “a kind of guardrail—a fence to keep you from harming yourself and others, providing safe parameters and prevent you from disasters, small or great.” That description deals with the internal feeling, the emotion or inner sense of guilt. And there is an objective, external counterpart that can be paired with that internal feeling—the fact or reality of guilt.

The pitfall of overusing guilt (discussed in Part 2A) speaks to the internal aspect—on one hand, superimposing a sense of shame for accidental or ignorant mistakes; or, on the other hand, piling on too much blame so that the offender’s internal sense of guilt is disproportionate to the importance of the original offense. Overuse of guilt is not conducive to a healthy team environment.

A preoccupation with innocence is also a problematic tendency for people from an Innocence-Guilt background, since it can result in a greater concern for legality than for morality.

In an Innocence-Guilt–oriented society, there is just naturally more legislation. People who like to be aware of boundaries and absolutes, who like to have clear, un-budging reference points (preferably in writing!) for what is “right” and “wrong”—they tend to legislate more than people from other cultural paradigms. And the hope is that what is socially acceptable as moral and ethical and good is also legal, and vice versa.

What happens, however, is that—especially within a corporate context—the mountainous stacks of laws and particular policies and minutiae can backfire a little bit. Although originally created to define and enforce parameters for proper conduct, this well-intentioned legislation can also create a dilemma: The interpretation and answering of “What’s the right thing to do?” in any given scenario gradually declines from a moral and ethical reality to a legal, judicial ideal. The benchmark standard for right and wrong is no longer a matter of personal conscience and cultural morality or goodness. Instead, the benchmark standard boils down to predicting a judge’s verdict.

Instead of asking “What is inherently moral and good and ethical?”, corporations and non-profits begin to rely instead on “What would hold up in a court of law?”

Would a judge declare such-and-such conduct as “innocent” if a case were to be brought to court? This “as long as it’s legal” is a dangerous line of reason. It is an excessive focus on innocence in terms of meeting the letter of the law, rather than honoring the intents and purposes that spurred the law’s creation.

Instead of striving merely for an above-reproach track record, corporations should strive for a reputation of genuine integrity.

There is such a thing as corporate conscience, and keeping that conscience clear of guilt! As awareness grows about Innocence-Guilt–oriented societies’ tendency to focus too much attention on the mere appearance of innocence (and the corruption it can cause), many corporations and non-profits are taking a hard look at their own policies and procedures—and their ramifications in the areas of social responsibility, corporate governance, HR, global HR practices, marketing practices, practices related to performance management, and so on.

Rather than seeking counsel about what might be perceived as more or less legal and how minimally they can conform to legislated mandates—many organizations are re-forming core values and committing themselves to uphold higher, self-imposed standards of integrity in their private and public dealings. Instead of trying to find out what is possible for them to “get away with,” they are brainstorming ways to add not just value but virtue to the marketplace.

As organizations in the business world are beginning to do, we as individuals can also start to pursue even in our personal development. We can take those two questions—“What’s right/moral/ethical/good?” vs “What’s legal/What looks good?”—and bring them back together. There does not have to be a dichotomy between inherent and apparent innocence.