Wandering the World – A Hopeful Tale 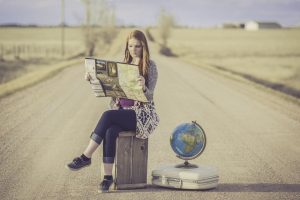 As a kid growing up, I was enamored with the idea of sailors. I felt that I too could hear the song of the sea whispering in the wind. The poetical descriptions of “the call of the sea” felt right when I read them – I was infected from a young age with the desire to wander. I grew up moving every four years, and I became very familiar with the way a goodbye makes your tongue heavy with grief but your feet light with adventure. Change is hard, but change is invigorating – like jumping into freezing cold waves and feeling fully alive even as you lose your balance and feel ice water tingling against your skin. I remember knowing even before my parents would sit us down to talk that it was time to move.

Living as a sort of modern nomad, I begin to pick up little aspects from the cultures I experienced. Phrases and ideas begin to stick into the corners of my brain and wire themselves into the mainframe of my mind without me knowing of their existence until they were challenged. I began to feel too American for the countries I was living in, and not American enough for my home country.

Due to the nature of how I have lived, I have never felt fully enveloped by a culture. I am Midwestern (a region of the United States) in accent, intercultural in ideas, and perpetually confused by where home is supposed to be located. I learned and unlearned and relearned every time the plane touched down in a new place; I began to be comfortable in the position of a constant student.

When I moved to Dubai at the age of fourteen, I did not realize how at home I would soon feel among a rapidly changing landscape. My people have always been the movers, the sailors, the expats, and the wanderers. I sometimes felt that everyone else had a ‘manual’ to life that I had lost, because I felt at home everywhere but I did not feel like I truly belonged anywhere. In Dubai, almost everyone is at home in a place that they do not “belong”, i.e. not their passport country.

When my family first began moving, we attended workshops and training seminars that helped prepare us for life overseas, but none of them ever answered the questions about myself that stayed in the back of my mind. These training seminars often dealt with how to grapple with a completely different host culture and how to assimilate into it.

However, I have never lived anywhere long enough to be fully assimilated by a culture, so even when around other TCKs (third culture kids), I felt out of place. Their experiences were so different from mine. They could speak two languages and I had only ever learned English because by the time I could have picked up a language, we were onto the next place. I felt unqualified for the club.

That’s where ICI comes in. I was awarded the KnowledgeWorkx ICI Teen scholarship to attend their Inter-Cultural Intelligence Certification workshop.

Inter-Cultural Intelligence helped me find an explanation for the first time, for what I had been feeling for a large majority of my life. I was not alone in the way I sat on the fence, feeling more like an observer than a practitioner. Due to immigration all over the world, there are multiple cultures colliding to create intercultural environments in countless places. What I had been experiencing was not two host cultures conflicting, but multiple cultures creating an intercultural environment. I learned more about what it was like to be a global citizen, and not just an American one.

There have been things I have always felt in my heart that I was suddenly given terms for that helped to explain it. There are concepts that I better understand about my family and my own worldview because I have the words to put to them. The Three Colors of Worldview especially was a concept that really helped me to understand certain connections that I make everyday without even thinking about it. Knowing yourself well is a step closer to knowing others better.

I see everything that happens to me now with a different lens. I think critically about situations that happen and I find myself becoming a more understanding individual that tries not to leap to conclusions. People are more willing to teach us than we think, if we are just willing to listen and learn.

As I make my first independent move on my own for university, I pause to consider the lessons of my childhood that guide my every step. There is a quote from a science fiction TV show that sums it up and I make sure to watch it before almost every move: “Always try to be nice and never fail to be kind.” In every interaction I have with another culture that confuses me, I want to be kind and understanding. This is something that was repeated again and again to me as a child, and I am forever grateful for it. I think that we all need a little more kindness and understanding in this world, all it takes is humility and learning that it is ok to be wrong. Instead of being a cultural critic as we look at the world, we should have an attitude of cultural learning.

“Be kind” – is the resounding message of my wandering childhood, and it is what I want to end with. The world is more different than we could ever believe, filled with valuable lessons and gorgeous traditions that are all available to us if only we have the willingness to learn and just be kind even in the midst of fear and misunderstanding.

In conclusion, I would not trade my experiences for the entire world. I have learned to use my experiences to bolster me up, let mistakes teach me and let kindness be my compass. I have learned that change is hard, but change is good. I have learned to keep the good memories close to my heart, grieve when I must, but always look forward to the future. These are the lessons that wandering and being “in-between” have taught me. Just because I do not feel a sense of belonging to a physical place does not mean that I cannot belong to people. A lack of a physical home does not mean that I am alone. ‘Wander, Learn and Be Kind’ … In all my wanderings, I am learning to be kind.

Ruby Maxson was the recipient of the KnowledgeWorkx ICI teen scholarship award. She is currently a University student in the U.S, studying to become a Counsellor using her ICI Certification.