The 10 Most Common Organizational Values, An Intercultural Examination 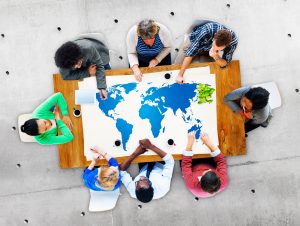 Values and well-crafted definitions look good on paper but in too many cases don’t result in culture change.
In the first two articles in this series, we explored how defining culturally agile behaviors creates a resonant organizational culture where a wide diversity of people feel they belong. So, we created this ‘Top 10 most used organizational values list’. To do that we consolidated the research and writings of multiple sources (Thank you to Deloitte and Booz Allen & Hamilton as well as publications in HBR and Forbes).
Our goal in this article is to give you new insights into how these top 10 value words are explained and lived out very differently around the world. With over 25+ years of experience working in over 70 countries, we want to pass on practical ideas and stories on how to make corporate values come alive in a diverse and intercultural organization.

When did defining Corporate Values start?

Although it is not clear who started the corporate values movement, the book “Built to Last” had a significant role to play. The authors (Jim Collins and Jerry Porras) talk about a key principle they found with organizations that last: “Clock building, not time telling”. Building your ‘organizational clock’ requires you to have well-defined and daily lived-out core values.
Fast forward to today and more than 80 percent of all large companies publish a list of values as well as a definition of what they mean. Core values seem to have become a ‘must-have’ to build a healthy organization. But in most organizations the ‘must have’ doesn’t translate into lived-out values in the day-to-day working lives of employees.
So, let’s dive into the top 10 corporate values and why it is so challenging to define meaningful and culturally agile behaviors around these top 10 most used corporate values. (Fully unpacking all the intercultural complexities related to these would take several books).

The word integrity in English comes from the Latin word ‘integer’; being whole, complete, or ‘an undivided or unbroken completeness’.
When you look at similar words in other languages the word can have a wide variety of meanings. In non-Latin languages the meaning has a lot to do with ‘standing upright’, ‘your head lifted high’.
One of the challenges with integrity is that it can compete with other priorities. Some cultures emphasize harmony at the expense of confronting questionable behavior. For other cultures, it is the need to show loyalty and not ‘breaking rank’ that is more important.
Sometimes the definition of integrity in one cultural context can cause your business to lose money in another cultural context (e.g., calling ‘taking a client out for a drink or a meal’ a bribe or a conflict of interest is directly opposed to local customs on building healthy customer relationships). Another example would be to not allow employees to introduce a family member as a candidate for a vacant position. This is seen as unreconcilable with local traditions.
Telling company drivers that they can’t offer lifts to family members can be so counterculture that I have heard drivers say they left the company because they couldn’t face the shame of having to say ‘no’ to family members when they asked for a ride.
The biggest issue is not that integrity is not important but defining integrity in such a way that it is culturally agile and can be implemented effectively in all jurisdictions & cultures without major challenges. If your definition of integrity doesn’t work for certain cultures or in a certain context you run the risk that they will create their localized meaning around the word integrity.

‘Concern for customers’ can be as simple as ‘we are customer centric’ or as radical as ‘customer obsession’.
On paper, most companies will identify external customers (customers that are the recipients of their products and services) but also internal customers (the way different divisions in the organization serve each other) as equally important.
At the same time, culture has a huge influence on what external client relationships might look like.
How are sales staff seen by your clients? Is it a respected and honored job or is it a servant-level position? This has a direct impact on how people in sales can engage with their customers.
In the retail world: is it respectful to follow a customer through the store to communicate that you are available immediately when the customer has questions? Or is that seen as disrespectful because you are intruding into their space, taking away their ‘agency’?
Some companies have strict policies around discounts and what it means to ‘go the extra mile’ with the customer. Unfortunately, these policies are not always designed with cultural agility in mind. I remember talking to a finance officer in oil & gas who didn’t know what to do with an expense line-item from a crew who worked on a pipeline in a tribal area on the continent of Africa. The expense line-item read: “Cow purchased to express our gratitude to the local tribal leader”. Was it a bribe, was it a gift, was it an expediting fee…?
When it comes to internal customers it is crucial to create a culture with a collective understanding of hierarchy and how leaders in the organization think about the interdependence between business units and departments. This has become especially challenging because of the rapid rise of remote work in combination with matrix organizational structures. In some cultures, leaders see their role as monitoring their staff because they believe that if they stop monitoring their staff their productivity will go down.
This leads to steeper hierarchies which makes it more difficult to implement ‘business partner’ models for HR teams. If a leader believes they need to monitor their staff, a direct connection between their staff and HR can be threatening to the leader because they can’t control the narrative.
Creating a ‘third cultural space’ around customer centricity requires a deep understanding of what a healthy customer interface looks like across cultures. It requires the ability to distinguish between what needs to be universally implemented and what can be figured out in the local context.

Inclusion and Respect for all

This is all about Diversity, Equity, and Inclusion (DEI) related behaviors. Diversity is one of the fastest-growing values in organizations around the world. This is visible in the double-digit growth of the number of senior leadership roles that have the word diversity in their job title.
One way to look at diversity is by breaking it down into seven areas. All areas fall under the header of DEI (there are a variety of other forms of diversity, like generational diversity, or religious diversity, but we don’t have room to unpack those in this article).
It is paramount to be culturally agile in crafting policy, designing learning solutions, and composing communication around these seven diversities.
The seven diversity ‘buckets’ originally come from North America and have to some extent been embraced by countries in Western Europe and Australia/New Zealand.
The seven diversity focus areas are:
The challenge is that these diversities do not always translate into other parts of the world. The issues around race are super important in the US but are either not understood or vastly different in other parts of the world. Even the meaning of the word race is often not understood because in most countries around the world the race conversation is not the biggest diversity challenge (it could be local ethnic groups, it could be ‘local <> expatriate’ etc.).
Adding to the complexity of designing a global DEI strategy is the vast difference in legislation around the world. Regions like North America, Europe, and Australia/NZ have a substantial number of diversity-related laws while other regions and countries have far less legislation. Some countries might even have legislation that goes against the diversity legislation in the ‘HQ home country’ of the organization.
Therefore, KnowledgeWorkx is a big advocate to equip DEI practitioners from a culturally diverse organization with cultural agility; we believe cultural agility needs to be at the center of all DEI work.

Teamwork remains the ultimate competitive advantage, both because it is so powerful and so rare – Patrick Lencioni…
KnowledgeWorkx uses both the Patrick Lencioni (Five Behaviors of a Cohesive Team) and for interculturally complex teams we have developed the “Four Pillars of Intercultural Teaming.”
We have discovered that teamwork is not the same in every context and teams need to have the freedom to define their team culture that resonated with their unique mix of people. Some teamwork behaviors could be universally defined but leaving room for teams to develop their own culture (creating a team charter) is crucial to unlocking the competitive advantage Patrick Lencioni is talking about.
When we collaborate with teams to develop their “Third Cultural Space,” we focus on four key conversations:
Let’s start a conversation to explore how you can make your organizational culture come alive in a diverse and interculturally complex context.
Read the second part of this article.
Do you want to learn how to develop the cultural learner in yourself and those around you? Join our next Inter-Cultural Intelligence Certification
If you want your team or organization to become cultural learners let’s start a conversation. Our modular system allows you to get learning solutions that deal with your specific challenges in the format you choose.